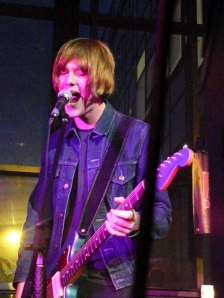 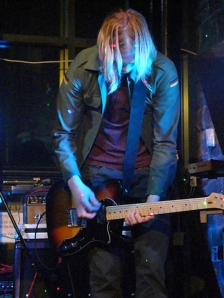 As soon as the first notes come alive, Toba Caldera show that their sound has just as much in common with Black Sabbath and Doom Metal as they do the usual indie fare that is offered up by Burn Down the Disco every week. It’s like some Black Sabbath Motorcycle Club. In fact, I actually came across this band while looking for Doom Metal on bandcamp.com; totally unaware that they were from our humble hamlet of Barnsley. I was amazing by what I heard – and that was just their demos.

The Three of Me is a bass driven, feedback ridden, nasty bugger and a much more ferocious beast than the version on their Demo #1… which I highly recommend. On record it is swagger. Here it’s a tank and is louder than half the metal bands in town… and better…  and darker.

Darkest Kind, with the line “can you feel it in your skin”, utilises both vocalists; one much more gruffer than the other. Together, they’re like Richard Ashcroft and Tom Meighan’s been brought up on a diet of Electric Wizard. Both songs are definite set highlights.

A shame though then that there were a few tech problems. And at one point vocalist James shouts ‘Can we have more reverb please?’ and it reminded me of a friend, who of Toba, said “don’t like them. Too much fucking reverb.’

Well, I love it and on a week that saw the release of a totally reverb drenched new Richard Hawley album, finally reissues of the My Bloody Valentine catalogue, I am very pleased to see a band flying a banner for some dark, psychedelic rock.

The Courthouse is a weird place to have live music. It can’t be a paid venue and you always has a variety of locals in there. It’s also very light and any atmosphere has to 100% come from the band and the audience alone; so they got to be good.

This is the first time I’d actually got round to see them outside of a festival. A couple of songs in to their set and front man and growler Brett says “those first few were just to warm up the bar-staff. Now we get nasty.” And it is at that point that they really do knock it up a gear, including vocally and their set kicks in.

As a band, they are technically pretty slick and Brett keeps up the dirty vocals without fault. Their sound is a mix of those steam roller grooves that Slipknot churn out so well and vocally, at one point Brett even had a tinge of Burton C Bell doing Death Metal .

They, along with RedMist Destruction are probably one of the heaviest bands in town and CF Bundy definately are the nastiest. NB: They certainly aren’t the nastiest band in the world though (that honour I give to Captain Three Leg – check them out). Grebbing on The Courthouse carpet does no end for the deco and the finer songs in the set such as Visions of War, Fisted By the Lesser Known Chuckle Brother and Enemy do just as much for The Courthouse’s foundations.

And just a quick mention of Tom Prendergast… It’s only when you peel your eyes away from James’s gurning that you catch a glimpse of just how fucking good this guy is. Although drumming here, he rips it up in various bands of various genres on various instruments and sweats it just as much in any of them.

If you like you metal as loud and as dirty as possible; CF Bundy will never fail you.

BOTH BANDS CAN BE SEEN ON THE FESTIVAL CIRCUIT THIS SUMMER.

TOBA CALDERA will be headlining the Noise Delays Stage at Coalfield on Saturday 14th July.

CF BUNDAY will be playing The Extreme Marquee at BOMfest on Saturday 28th July.

…and of course check out both bands pages for more local gigs.