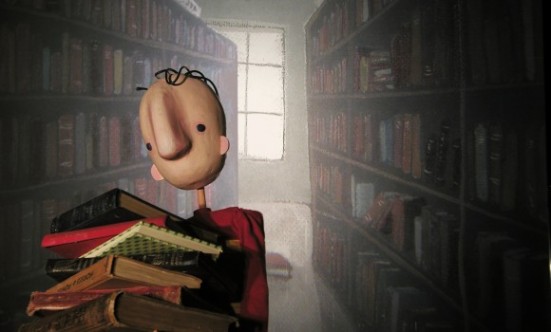 Oliver Jeffer’s The Incredible Book Eating Boy was released back in 2006 to rapturous reviews and went on to win numerous children’s book awards over the year that followed. It tells the story of a boy named Henry who develops an insatiable and most curious book eating habit and has recently been turned into an amazing theatre production by Bootworks Theatre and what is unique about this production is that each performance is played out just for you and you only.

Taking place in one of the company’s special crafted Black Boxes, you take your place on a stool with your child in your lap (in my case my half-sister Mia), watch the lights go out and the magic begin. The performance lasts for five breathtaking minutes and is one of the most unique theatre experiences you’ll ever get in children’s theatre and follows a current trend for interactive works for an audience of just one. Check out the adult-only London show, You Me Bum Bum Train, which definitely takes the idea to another level.

To say much more about The Incredible Book Eating Boy would be to give too much away. The story is told by a number of performers who appear and disappear at breathtaking pace; some with puppets, other with masks and the story also incorporates another of other clever devices should as lighting, projection and also personalisation – just so you know that it was especially for you and no one else. Every performer in the production was incredibly skilled and impossibly fast. It was hard to tell how many there were; was there three, four or even ten? My little step-sister whispered that she was scared when the lights went down but I interpreted that as nerves as she had never experienced anything like it before. It is very fast paced and all the better for it. Less than a minute in and her nerves had turned to giddiness and laughter. Most of all, both she and I were mesmerised by it.

Before and after each performance, every child and adult is invited to sit in a life-size replica of Henry’s bedroom, read his books and play his games. You are also invited to go and meet the performers and explore the props and puppets following your show; adding a real unique touch to what was already a really unique and brilliant show.

The Incredible Book Eating Boy follows in the footsteps of the book by being an utterly essential experience for children. Mia (aged 7) said ‘it was crazy bonkers’ which is most definitely was, and you would be crazy bonkers to miss it.

The Incredible Book Eating Boy continues to play at The Cooper Gallery on Sunday 9th.

Tickets are £5 and includes a show for one child acompanied by one adult.

For more information head on over to the website.