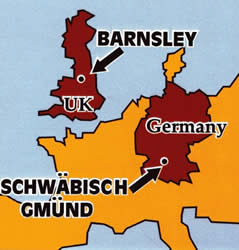 In 1971, Barnsley was officially twinned with the German town of Schwäbisch Gmünd. However, cultural exchanges between students, parties, youth groups and civic dignitaries from the two towns occurred long before then.

This was only something I was really aware when I was at school and even then it was only mentioned fleetingly. This article will showcase some of the current alternative musical talent currently playing live in Schwäbisch Gmünd.

In and amongst the concert venues and clubs, you will also find a successful  folk club, the rock festival Crowfields and projects such as ‘youth cultural centre’ Esperanza, a government funded venue which acts as not only a live venue, but also a place to support local artists and art workshops but also acts as a place for cultural exchange in it promotion of diversity.

The town’s live music scene seems quite comparable to our own. There is a large emphasis on metal bands as there is in much of mainland Europe, there is a thriving local folk scene and there is also number of electronica and indie bands. Here is an example of just some of the most popular:

Formed in 2011, Sundown is a Melodic Death Metal/Metal-Core band formed in 2011 and takes influences from bands like Children of Bodom, Bullet For My Valentine and Scar Symmetry.

Their facebook biography explains that prior to Sundown forming, members Luke and Manu were in more mainstream classic rock band called God of the Dead, but due to creative differences, they left to start a more contemporary project.
This video is a studio report and shows the band recording their song Abandon.

This second Metalcore/Death Metal band was formed in 2010 when guitarists (the very British sounding) Michael Holt and Benno Waible first met in a bar in Schwäbisch Gmünd. After a few jam sessions they drew on some of their previously written songs, radically rewriting them and also began composing new ones. In January 2011, Denis Kopp joined the band as the drummer, completely rewriting the drum tracks.
Since March 2011, the band has been playing live, with their debut EP Hell’s Fire being released in October that year, which you can download from this link: http://www.mediafire.com/?hs62r4udul13x6w

This is the title track from their EP.

Wasted Youth is a hardcore punk band hailing from Schwäbisch Gmünd. Formed in 2008, they are a very political band with a strong leftist and antifascist attitude. They have shared stages in Germany and around Europe with the likes of Madball, Agnostic Front, H2O etc. and their first full length Stay Free was released in the end 2010 on Diffidati Records/Casual Records.

Their follow-up record, the four track EP Fire & Flames was released in 2011 and was dedicated to Georg Elser, a working class local man who attempted to assassinate Adolf Hitler in 1939.

This is a video taken on their summer 2010 tour of Hungary, Serbia and Bosnia Herzegovina.

Hrymnir is a one man black metal project by Axel Pascal Paridon, who not only takes influences from classic second wave BM bands such as Emperor, but also Folk Metal and Viking Metal such as Amon Amarth.

BLOODFLOWERZ have actually recently disbanded but they had a pretty decent following during their six years together. They released three records and have played gigs with a number of popular European goth bands.

With hints of mid-80s Siousxie and Evanescence style symphonic metal, this is the kind of music that would definitely be lapped up at The Polish Club’s goth nights.
This seems to be one of their most popular tracks and has an incredible 93,000 views on youtube alone.

Duke Lucent describe themselves as Post-Noise-Indie-Prog-Rock and their songs as catchy, tricky, noisey and melodious. They remind me a little of Deerhunter and definitely take a lot from Sonic Youth/My Bloody Valentine, and makes for some bloody good indie pop. This is a track from their last album Attache.

These guys are my favourite of the Schwäbisch Gmünd bands I have discovered so far. Their official biography describes them as… “We make post-rockish-indie-guitar music. We like long songs. We love delay. We tape parts that we like. Unfortunately not as often as we like.
Today we are four guys spread over Germany, working in different dayjobs and playing in different bands. When there is time we make music as Skapegoat.”

They formed in the 90s and recorded two albums, Album of the Universe (2001) and Allaboutaway (2005); both of which you can download for free from their bandcamp page and I highly recommend them if you like the Barnsley bands Cocean and The Black Lamps.

Band member Robert Barth, also makes music in Schwäbisch Gmünd under the name Robenz and remixes under the name Doserhand (more later). Here is a track from their last album, Allaboutaway.

Robenz is the monikor used by Skapegoat member Robert Barth. He has been making electronic music using samplers, synthesizers and computers since the 1990s. Originally influenced by hip-hop, his music gradually evolved into Trip-Hop, resulting in a 12 track album Between Stations. As well as being a member of Skapegoat, he also plays with jazz bands and also acts as a producer for many other acts. Robert also produces remixes under the pseudonym Doserhand.

More Black metal, this time from the controversial and brutal Blood Torrent. The band described their music as ‘earth shattering, no-compromise black n roll’  and have shared the stage with current international players such as Taake.
Here is their track Elemental Scorn.

Having formed in 2008, in their first three years alone, they played 111 gigs, toured Ecuador and even supported ZZ-Top. They have won a number of national band contests and have received radioplay all over Germany. But what do they sound like? Very commercial but very good radio friendly pop rock.

Check out this entire 50 minute concert…