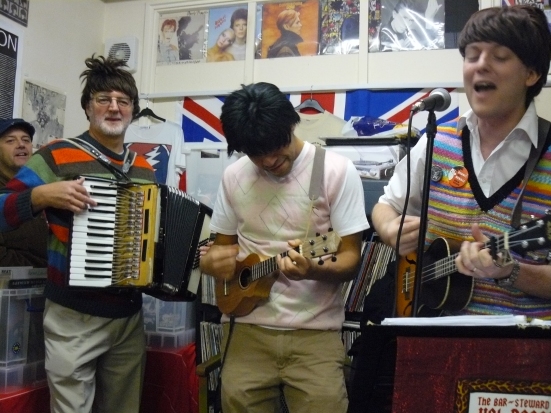 …and it’s not even National Record Store Day yet.

This is the kind of this you’d expect to happen in April when we celebrate those wonderful independant record store but really is the kind of thing that should happen every week.
Barnsley’s foremost comedy folk rock band The Bar-Steward Sons were in Barnsley’s finest vinyl emporium to launch their new album, Sat’day Neet Fever for a specially selected audience, prior to their sold out performance at The Lamproom Theatre tonight. 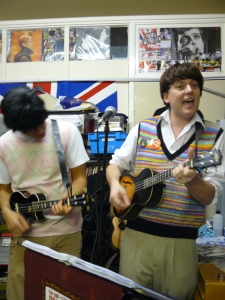 The three-pieces crammed themselves into the corner of Jim’s cosey unit with a selection of ukuleles and an accordion in tow. Rather than play a shorter version of the set they’d perform that evening, the put together a small crowd pleasing collection of cover versions such as Teenage Kicks, The Snake (which featured backing vocals from Scott’s brother Lewis Ryan), and wonderful version of It Must Be Love which was led by the audience rather than the band and a finale of Kiss’s Rock and Roll all Night.
And inbetween a collection of the kind of classics with a Barnsley twist they are so well known for. The Commodores’ Easy becomes an odes to Sunday morning hangovers with Queasy, Bob Marley’s I Shot the Sheriff turns into I Shopped at Asda and a highlight for me was The Jam’s That’s Entertainment which was turned into a rant about overpriced cinemas with That’s Centertainment – though it turns out that was actually rewritten and donated by local musician Chris Sammon. Another highlight was a version of Talking Head’s A Road To Nowhere.

This was the first time that some of the audience had stepped foot into Jim’s and now probably won’t be the last. It was a great way to encourage a sneaky purchase too. I walked away with the soundtrack to Stanley Kubrick’s 2001 A Space Odyssey and The Runaways’ self titled debut.
Following the set was a DJ set which actually consisted of 7″ records which everyone was encouraged to bring along to play, so the collection was eclectic and fun.
Before I introduce to some of those audience members that bought along records to listen to, I just wanted to say, what with everything that has happened in the last month regarding HMV, it’s great to see local musicians and businesses working together to keep our local records shops alive. Go pay Jim a visit. You’ll definitely find something you want there. facebook.com/JimsRecordsBarnsley 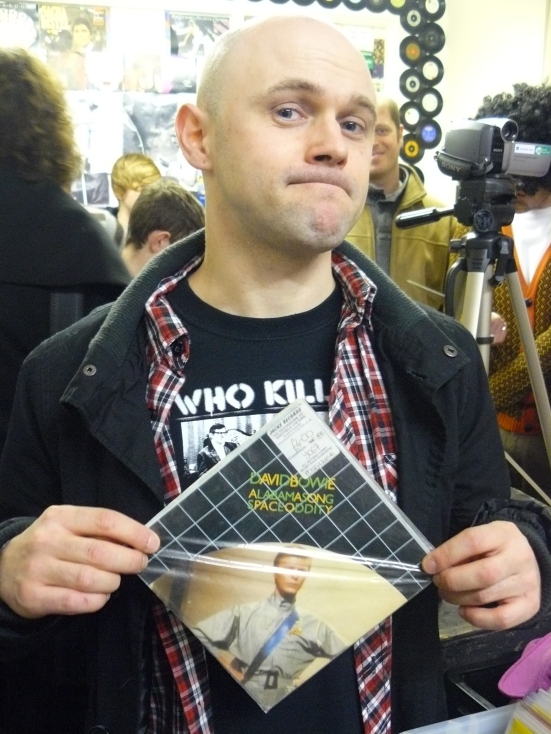 Me (Jason White of Alternative Barnsley)
I brought along a copy of David Bowie’s version of The Alabama Song, enclosed in fold-out poster.

Scott Doonican
He bought along a copy of Creedence Clearwater Revival’s Travelin’ Band. 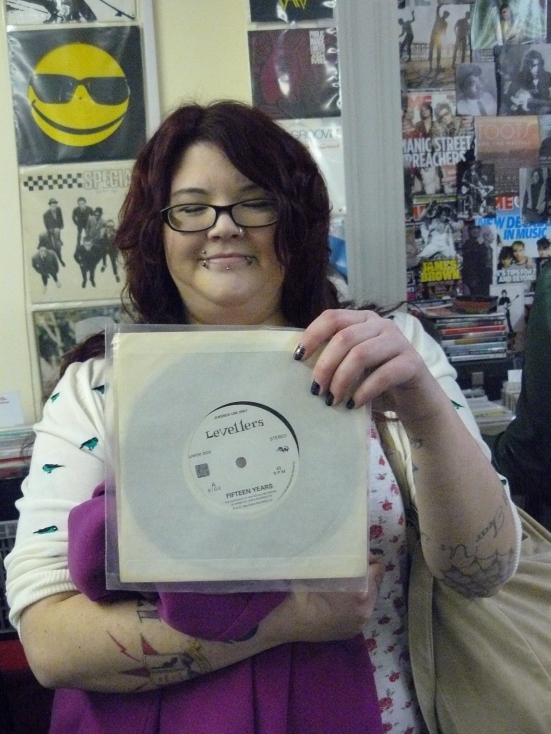 Catherine Loughlin brought her copy of The Levellers’ Far From Home/Fifteen Years.

Eviee Bowden brought along Blockbuster by The Sweet.

Tony Wright (member of the band The Hurriers) brought along his favourite 7″ We Don’t Talk Anymore by Sir Cliff.

Simon Porter brought along Sheffield’s Heaven 17 and played the beside to I’m Your Money, Are Everything.

Dave Harrison fetched about the one hit wonder John Wayne is Big Leggy by Haysi Fantayzee. 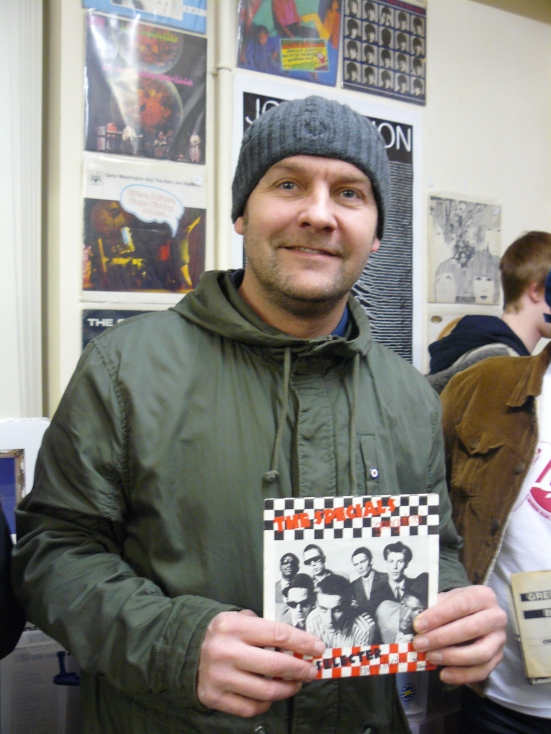 Ian Horton brought with him a copy of The Specials’ Gansters issued in France.

Sam Horton picked put his copy of Green Onions by Booker T & The MG’s to play.