On Thursday 28th March, a number of Barnsley musicians and like-minded music fans descended onto Wakefield’s famous The Hop venue to raise money for the Mid-Yorks UNISON Strike fund.
The night of live music was organised by Barnsley resident Tony Peter Wright, who led the way with his own band, The Hurriers which he put together with a very specific aim – anti-establishment politics and poetry with a socialist stance. The band is named after the young children, known as The Hurriers, that used to work down the mines and was inspired by the 1838 Silkstone Colliery Disaster called “The Husker Hurriers” in which 26 Barnsley youngsters were killed whilst working down the mine.
The group is made up on Tony on vocals, Jez Walman on bass, Sam Horton and Ellis Smith on guitars and Zak Reyt on drums. Each member has been or is a member of other Barnsley bands going back to the 1980s such as This Condition, The Barn, Stronger Than Dirt, Mount Buffalo and Swamp Fever. Their set features songs by The Clash, Tom Robinson Band, Stiff Little Fingers, The Specials and of course their own material.

Also on the line-up was the magnificent Cambodia – a political punk band drenched in the sounds of roots reggae and folk music, the brilliant indie group The Glavins who members often put on their own benefit concerts for local causes, the last-minute addition of three members from the wonderful Mynas who played a special acoustic set, and the very special guest Matt Abbott from Skint and Demoralised as compère.

Speaking about the event, Tony says ‘everything that I was hoping to achieve happened and that was, raise money for the Mid-Yorks UNISON Strike fund, raise the profile of the strike, four brilliant Barnsley bands giving a great show in neighbouring Wakefield, to make sure everyone had a great night and lastly for The Hurriers to do themselves justice as a solid up-and-coming band.’
And so the real good news is that the brilliant efforts from everyone involved raised more than £400 for the Mid-Yorks UNISON Strike fund. The concert was very well attended with a large number of people travelling over from Barnsley to fill the venue. It was so successful that Tony is now planning a Tarn-based politico-pop extravaganza – and of course, we’ll update you on that as soon as we can.

Keep up to date with future gigs from The Hurriers by following their facebook page > https://www.facebook.com/TheHurriers 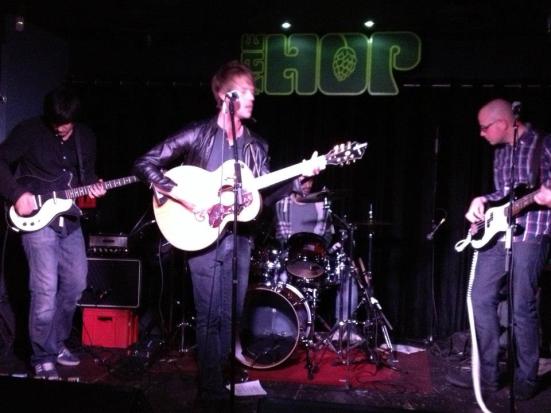