‘5 mins after “The Seaweed in the Attic”‘
Picture by Laura Smith.

The day which had initially been a little overcast but had slowly brightened, so that eventually you started to regret having put on that cardigan, had once again grown a little dim. The shadows that had been lengthening across the roads had now joined together into patches of deep shade. The wind, too, had begun to pick up, causing the leaves on the trees to shiver, and to pull themselves together for warmth. The noise they made as they stirred on their branches found its echo in the water feature, where streams ran down over a wall only to gather in troughs an inch or two deep at its base.

In the clearing in front of this water feature people continued to eat their picnics and chat despite the weather. Somewhere, some music was playing. Tea and cake were being served. One woman in a dress and floppy hat stood by a wall reading an old magazine. At her feet she had a small bag.

The music changed. As it did, one woman made her way out into the open space. I might as well tell you that this was Mandela Gardens at The Civic in Barnsley. She then proceeded to change into her swimming costume, clutching a towel about her to ensure her modesty.

At the same time, the woman in the floppy hat put her magazine away, crept over to the few trees in the middle of the garden and also began to get changed. Before long these two were joined by others, until they numbered six in total, all of whom were eventually wearing their swimming costumes.

It was only really now that they were wearing their matching outfits that they recognised each other for what they were. Everyone else had already recognised them. These women were in fact mermaids – the six performers from Yorkshire Life Aquatic, and this was their ‘Million Dollar Mermaid’ Gala. This afternoon-long event was part of the Civic Artistic Residency Programme at The Civic, Barnsley. And these ‘dry land synchronised swimming’ performances by the Mermaids themselves were its undoubted highlight.

As the Yorkshire Life Aquatic choreographer Zoe Parker explained in her interview with me (which you can read here), the idea for this seemingly unusual project was inspired by the Hollywood films of Esther Williams and a desire to capture a certain ‘vintage’ feeling of relaxed glamour. The choreography, costumes, music and design were all calculated to forward this idea. The fact that in this homage the ‘swimming’ was really dancing and took place on dry land only added to the slightly odd sense of fun. 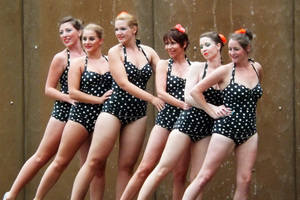 ‘All Together Now’
Picture by Laura Smith

The two-legged mermaids of Yorkshire Life Aquatic ran over to the water feature, started to clap so as to encourage applause from the picnickers, and then, as one, struck poses. The varied dance routine that followed featured a number of elements recognisable from synchronised swimming, or that at least gestured towards it. The performers executed shoulder stands whilst circling their legs over their heads; they emerged through hoops as though out of the water; the circled each other, their arms outstretched and their fingertips touching.

If the truth be told, this ‘swimming’ was a little less synchronised than it might otherwise have been. However, this only added to the easy charm of the performance, and to the event as a whole.

The use of hula hoops during one long sequence reinforced the vintage or ‘retro’ feel to the piece but was probably most effective in framing the individual performers. As the hoops were passed between and over the dancers the effect was something like that seen in a magic show when the magician convinces you that his levitating assistant is not being supported by wires. Here, the framing caused a moment of stillness; it allowed for a held pose amongst all the movement, the creation of another ‘pin up’ effect. Only once or twice did this stillness, coupled with the change in music, threaten the piece’s overall pacing.

As Zoe Parker has explained, this performance was always designed to be site specific. It had been worked on extensively in the five day residency period leading up to the Gala itself. In the end, the use of the space’s peculiarities was effective. Two performers took tea on the stone waves in front of the water feature. The other mermaids, temporarily hidden from view, then bobbed back into sight, their hair covered in brightly covered swimming caps. At various points the dancers ‘swam’ across the installation, their faces a picture of comic exaggeration.

The element of humour was used well. The unabashed absurdity of the project was recognised and embraced by the choreography, with its quirks and effects, and by the individual performers, who brought an infectious sense of the comic, of the farcical indeed, to proceedings without ever letting the whole thing become a joke. Those moments where the dancers looked around for each other, moved each other bodily into place or had to dash back to their mark in time for the next pose were good fun, and testament to Parker’s sense of joy in the project.

At the end of the performance each of the Mermaids stepped forward for their individual moment, if not in the sun exactly, then at least under Barnsley’s grey skies. The applause that broke forth from the audience was warm enough to dispel the threatening clouds. At almost the exact moment that the final pose was struck the sun finally broke through and Mandela Gardens was once again bathed in sunshine.

And with that, the mermaids ducked back down out of sight, gone. They will next be sighted at Bramley Baths on Sunday 29th September, 2013.

Picture: ‘And Smile’ by Laura Smith

James Holden is a writer, critic, reviewer and academic. He is the author of In Search Of Vinteuil: Music, Literature and a Self Regained (Sussex Academic Press, 2010) and the co-author, with Dr Simon King, of Conceptual Breakthrough: Two Experiments in SF Criticism (InkerMen Press, 2007). For more of his reviews, visit his blog Cultural Writer and follow him on twitter. This review was originally published on Cultural Writer on Monday 02nd September 2013.