Representing Live in Barnsley at Camden’s The Roundhouse, one of the festival organisers Dave Pearsal.

Having been nominated for ‘Best New Festival’ at the UK Festival Awards for the first time, it would have been easy to just pop down to The Roundhouse in Camden, London and get drunk on free booze while watching the great and the good pick up their gongs from comedian, Phil Jupitus. However, those that know me also know that was never likely to happen. When I found out there was a conference running through the day for festival organisers, promoters, agents etc. I knew I had to go along, have a listen, see if I could learn something and maybe even chuck in my tuppenerth if I could.

The debates began about the current state of the UK festival scene after a high profile hit list of festivals including Sonisphere and Big Chill were forced to cancel and several festivals failed to sell out for the first time. There was a section in the conference titled ‘Are artists fee’s killing festivals’ and after initially blaming bands and agents for all their ills, the whole debate got turned right back round on promoters and agents after a big London Management Agency accused them of trying to shift the blame for promoters taking advantage of the recession and holding festival fees for non-main stage bands for the past 3 years and that it was only a handful of headliners demanding higher fees but only because promoters were insisting on exclusivity deals preventing them playing any other festival in the country during the year, some even accused them of restraint of trade. The man behind Sonisphere though was having none of it and stated that they have a budget that they have to stick to or face disaster and that exclusivity deals were actually hurting festivals as there are not enough major headline bands to go around. Through gritted teeth he pointed out that Glastonbury is now the only UK festival to sell out prior to its start.
James Drury, the Managing Director of UK Festival Awards pointed to their recent survey that 27% of respondents went to fewer festivals this year and that 13% now held back buying tickets until they knew the full line up, not just the headliners. Even those attending festivals reported spending less money on food, drink and merchandise. Speakers from Download, Isle of Wight, Creamfields and Hyde Park Calling confirmed this and agreed the big festivals were having a hard time at the moment.

It was more interesting for me listening to the later debates involving people like Ben Robinson from Kendal Calling, Joe Heap from Towersey Festival, Chris Johnson from Shambala and Noz Nozworthy from Nozstock. These much smaller festivals said they didn’t rely on big name headliners as they simply can’t afford the artist fee’s, so they’ve found themselves almost becoming the training ground for new bands who are offered to them by the record companies at low rates or often for free, just so their acts can get to play to a good crowd and gain valuable exposure. Conversely, they also provide a platform for those bands that are no longer in the spotlight but are still making good music and ploughing their own furrough, and more importantly, people still want to see play live. They also do deals with small, local breweries for their beer and with local farmers and food suppliers. They felt this then gave them a ‘local’ feel to their festival and money being injected back into the local economy.
I particularly enjoyed listening to Noz Nozworthy as he related the story of Nozfest and how it all began in his mate’s field and 50 people turned up. Nine years later and a very respectable 7,000 people turned out for this year’s festival. Old Noz is still lucky if he makes a few hundred pounds profit for all his hard work, but it doesn’t bother him and it doesn’t put him off, he ploughs it straight back into next year s festival and starts work all over again as soon as the festival is finished. 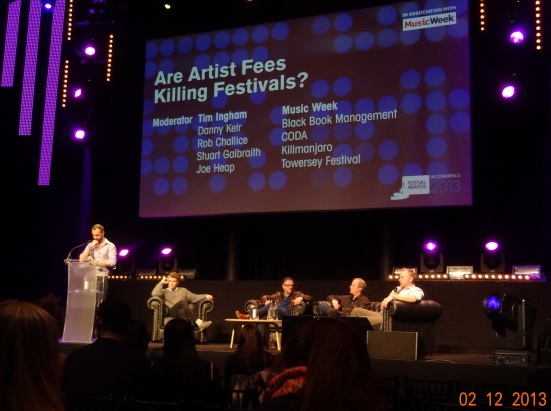 Some of the guest speakers and big names from the world of music festivals at the UK Music Awards conference.

As I listened to the debate I thought how the music industry has dramatically transformed over the past ten years. With the growth of the internet, artists are taking more control of their output, localised independent and alternative scenes are more prominent, helped no small amount by streaming/download websites like Bandcamp or Soundcloud and local radio. Bands can even earn money from people viewing their videos on YouTube. You don’t need to sign your life away to a major conglomerate universal multi-media company to record and release your music or tell you what your video should look like. However, if you do, then you have to be prepared that even if you sign a three album deal, the likelihood is you may not get past your debut album if sales aren’t what the record company are looking for. The modern music business has no time to pay for artist development, they are like Premiership football clubs, they want the finished article right now, hit the ground running and making money from day one, as soon as you have outlived your usefulness you’re out and the next big thing is in. And so shouldn’t it follow, with the recording and release process changing, that festival culture and live music culture would change with that too?

Is it really that surprising that the muddy field + high priced cardboard junk food + high ticket prices + dodgy portaloos and the same regurgitated headliners are failing to impress anymore. How many times can Metallica or Iron Maiden headline Download festival?
Music festivals were never meant to be about making huge amounts of money for big companies and treating people like cattle and herding 405,060,100,000 of them into a field, were they?
The rise and rise of the small local festival in almost every major town across the country is testimony to the fact that the music loving public aren’t there for fleecing, they’re here for the music, the experience and they want something different. Metropolitan festivals in particular have seen a spectacular rise in their numbers in recent years, Sheffield Tramlines, Live at Leeds, Wakefield’s Long Division, Liverpool Sound City, Camden Crawl and many more.
Unlike the major festivals, they’re not charging you £10 for a programme, £20+ for a t-shirt and they’re not charging you more than £200 admission, some of them are even FREE :O). The beer prices in the pubs will be the same as they were the day before and will be after i.e. NOT £4.50 for 0.4L (thats not a pint) like Leeds Festival, the food will have more variety, be better value and generally be more hygienic than a van in a field. Of course there will always be a market for camping out with your mates and getting away from it all, but the market is changing, and as with most change, it’s coming from the grassroots up.

Live in Barnsley 2014 takes place on Saturday 21st June, tthrough venues across Barnsley town centre. If you are a band or musician and would like to play, then apply via this link: http://www.liveinbarnsley.co.uk/application.asp

Its our category. Phil Jupitus reads out the name of the category nominees and when it gets to us there is a mighty shout of ‘YOOOOO REDS’ to which Mr Jupitus responds, “ooh ‘ello, Barnsley lads are in!”