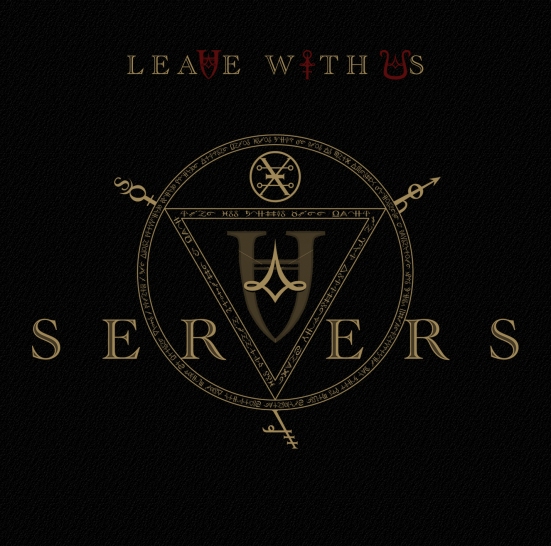 Servers are the newest act signed to the recently revived cult label, Undergroove Records. Leave With Us is their debut album. However, those familiar with either Undergroove or the Barnsley live music scene may already be familiar with G.U.Medicine and the late 90s outfit Sunlounger; the two previous bands fronted by Servers’ Lee Storrar. He, along with Lee Wilde (bass) and Ant Nettleship (drums) formed Servers in 2013 and for anyone with any familiarity with either band, this debut will have been eagerly awaited. Well, has it been worth the wait?

Damn sure it has? The first bars of opener Save Me From Myself ring out like some of the best from Baroness or Mastodon; an absolutely epic sound, complete with blast beats and soaring chorus. And then you have Storrar’s voice – hollaring for his life, like some psychotic preacher. This is exactly what a debut album opener should sound like. And that is followed straight up by the single Universes & Supernovas, which comes over like a Killing Joke Vs Hans Zimmer mash-up. The orchestration and choral arrangement on this one up the ante as far as possible, playing out for over six minutes; with not one minute wasted. Be sure, this debut is as big an album as you’ll get all year.

Track three it is literally back down to earth again with Claustrophobia – definitely one of a few curve balls that are thrown during the length of the album. Slow, mournful and even slightly reminiscent of HIM. In fact, the album artwork even bares similarities to HIM’s classic Love Metal. This is no bad thing though; Ville Valo could pen a brilliant rock song, and behind their pop sensibilities were the influences of Sabbath, Cathedral and Type-O Negative. Here Storrar’s vocals even sound a little like the late, great Pete Steele too. Claustrophobia goes to show that even when you have all that bombast, there’s no point of filling an album with wall to wall metal, when this dark and brooding ballad is laden with enough doom to still be as heavy as anything on offer here.

Leave With Us is packed full of massive bass heavy riffs and songs that will stay with you for a long time; each with a sound bigger than any three-piece you’ll be able to name. Run with the Foxes is a catchy as fuck – hook after hook after hook, and Dangerous Devotion has a brilliantly subtle dual guitar solo, followed by another fantastic orchestral arrangement. Once I Started;possibly the poppiest moment on offer here, is still an all-out rocker with a brilliant multi-layered vocal on the chorus. Just gone the half way point on the album is Mega High, which for me is the only track here that faulters. However, it’s not that isn’t good. It’s simply not to the high standard as everything else is here. It also feels a little disjointed and doesn’t quite flow with everything else. As a standalone track though, it’s got the swagger of Monster Magnet and breakdown that reminds me of the outro to the very under-rated Outlaw Torn by Metallica.

Do Gooders kicks the whole show back into gear again. If this was a vinyl, this would be the perfect way start the B-Side. Rain storm sound effects (where have I heard that before?), more erratic ranting from Storrar and an almighty groove a la Queens of the Stone Age at their heaviest.
Following that is King Things, the penultimate track and a clear indication that things are drawing to an end. This, along with Claustrophobia are easily the album highlights for me. This song sees Storrar channel both Jim Morrion and Josh Homme on what is a devilishly catchy and gloomy number, and what stands out from the entire LP as an altogether different beast. This is the sound of the band pushing themselves beyond the confines of the genre. When Storrar bellows ‘take me down,’ you just know he’s gonna drag you with him. And in ways, this sinister side of the record reminds me of Infernal Love by Therapy, a troubled yet raucous album. And like that, this album closes with Mother’s Grave, with its spiraling and a repeated refrain, ‘I swear to God and my Mother’s grave’.

There are so many bands I could reference here, and indeed already have done. In the end though, much of it goes back to The Doors. Like Servers, they sang songs of sex and death, dark and heavy with an epic sound, and on the rare occasion, with a pop gloss sheen. Leave with Us carried that torch perfectly. What Servers have produced here is something very close to a classic album. Dark emotions cling to the band’s every last note, while never losing site of the big hooks.
After following what Storrer has done since the very first Sunlounger EP, this is as close to the album I’d hoped he would make as possible.
It’s rare for a band this new, to create something this exciting and fresh, embroiled with references to the greats, both past and present. But backed by Nettleship and Wilde, and with astonishing orchestral flourishes from Chris Haigh, it’s hard to not triumph. Leave With Us may only just fall shy of perfect, but it quite possibly the finest rock album you’ll hear all year.

Leave With Us is released through Undergroove Records on 24th Feb.
Their single Universes & Supernovas is available now via itunes and Spotify.
Servers play their debut hometown show on Saturday 22nd Feb, with support from Black Vines and Lauren Tate. 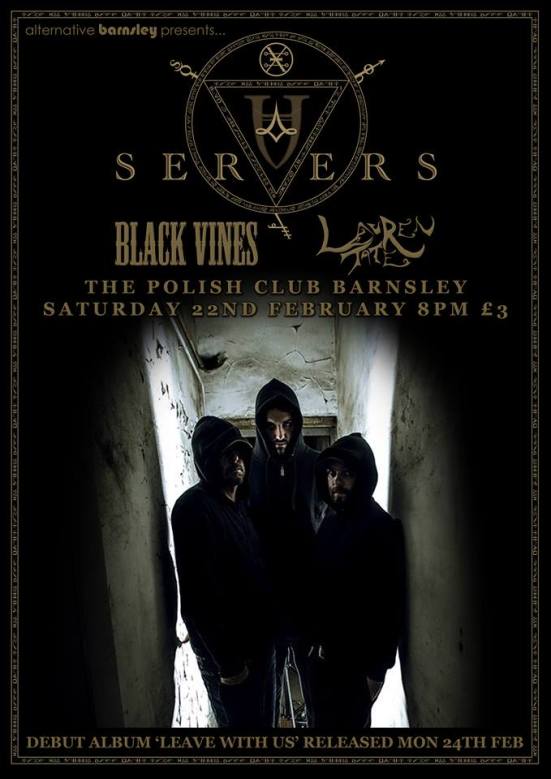