Read a great book last week called Reeling in the Years by Mark Radcliffe. He basically documents his life by selecting a song for every year from his birth to present day. It’s a great autobiography, but also a pretty good musical and social history.
I thought I’d try, starting with 1980.

I always remember the music. I always remember dates, times, places and the music. Not only where I was when I heard a song but also where the song sat on a record – first track on side one, second track side two. I remember the sequence of what a full side sounded like and as soon as I’ve heard the song, I automatically know which one should be coming next. Remembering is easy. It’s part of my subconscious. But trying to remember a song release in and from every year of my life, one that has a specific resonance for me, is easy up to a point. There are a couple of years where there is no memory at all. I only have made memories. I’ve told myself so many things have happened and that they were the way that it was, that they have become real. You look at photographs so much that you create some kind of story to hold all of the threads together.

Admittedly, musical memories from my first couple of years are more than hazy. So I fall back on false memories, mixing bits of stories your Nannan told you, photos of you in your baby-walker at one year old, news items.
Do I pick a song from the week I was born – Fashion, Super Trouper, Enola Gay?
Do I pick a socially significant song from 1980 – Another Brick In The Wall, Part II, Biko, Army Dreamers?
Or maybe a record that I would discover and fall in love with in years to come – Kate Bush again, Siouxsie, Kiss, Echo & the Bunnymen?
No. Whenever I recall my early years, one thing I always think of think of is my Dad’s record collection. My mother’s consisted of commercial soul and pop, such as Diana Ross and Lionel Richie, Bread and Bay City Rollers, which back then, as now, I had zero interest in. However, the majority of my Dad’s collection consisted of early heavy Blues based Rock and proto-Heavy Metal, Prog Rock and the then New Wave of British Heavy Metal. I used to what seemed like hours sifting through these LPs (and a small collection of cassettes) like books on a shelf. The artwork was fascination to my young eyes and even now, when I see the artwork for Uriah Heap’s Demons and Wizards and Rainbow’s Rising, it brings back so many memories of not only Barnsley in the 1980s, but also of re-discovering these records much later on. 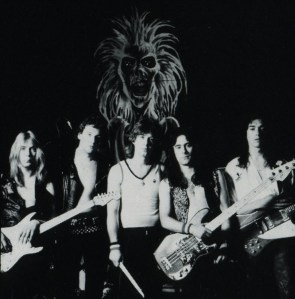 Two records in that collection probably hold a greater significance than the others. The first being Black Sabbath’s We Sold Our Soul For Rock n Roll… That was release in 1975 though. So despite its glorious gate-folk image of coffin-bound vamp, clasping a glowing hot white crux to her chest, it’s not my chosen record of 1980.
I was born December 5th. Nine months earlier, my yet to be mother and father were in Blackpool, posing for photos in front of the tower. They’d been together all that long. A few months maybe. My Dad wearing a brown leather jacket which in 1998, I stole from his wardrobe, only for my best friend to steel it from me when I was drunk and throw up down it, leading to the formation of a crust around the sleeves and his mother to bin it. If the stories I think I might have made up are correct, my then nineteen year old coal-mining father was a regular at the Ring O’ Bells. I picture him on his day off work, walking up Huddersfield Road from town, back home to Gawber with a fresh copy of Ace of Spades under his arm, wishing that Jackie wasn’t so into Cliff Richard. He takes last month’s purchase, Iron Maiden’s debut LP, off of the turn table and replaces it with Motorhead. There was never any other Iron Maiden in his collection. And despite I not really being a Maiden fan, that first album of theirs, is the one that still resonates with me today.

Eddie, their regular mascot, appears on the cover for the first time. Stood in the streets at night, ripped t-shirt, undead with a shock of yellow hair, under streetlights and the white of a full moon on his back and that now internationally recognised font, the words IRON MAIDEN.
When I got my very own second hand record player in my room, it was the first record I borrowed from his collection. My ten year old self placed the LP on the deck and unknowingly played both sides through on 45rpm. It sounded heavy, exciting and FAST. I had unwittingly invented Speed Metal. When I eventually worked out that it had to be played at 33rpm, I listened to it constantly. Phantom of the Opera and the title-track was some of the most exciting noises I’d heard. And the slower tracks like Remember Tomorrow and Charlotte the Harlot pulled on my teeny tiny heart strings as much as Optimus Prime’s death in Transformer the Movie (the 1986 movie, not the trash that Michael Bay forces upon us). A few years later I’d be extremely jealous that my best friend Antony had Maiden posters adorning his bedroom wall.
I can still listen to this album thirty-three years on and it still excites me. It has elements of punk in there, like many early 80s metal did, and Paul Di’Anno was a vocalist much more preferred by me than the over-the-top, metal opera that was Bruce Dickson, who replace him a few years later. I’m not knocking Dicko mind. He is a great front-man, he flies planes and is THE voice of Iron Maiden, but their debut was an album that belonged to an altogether different band. And though I really don’t remember 1980 at all, this is the album released that year that will holds the right amount of nostalgia and thrill for me.