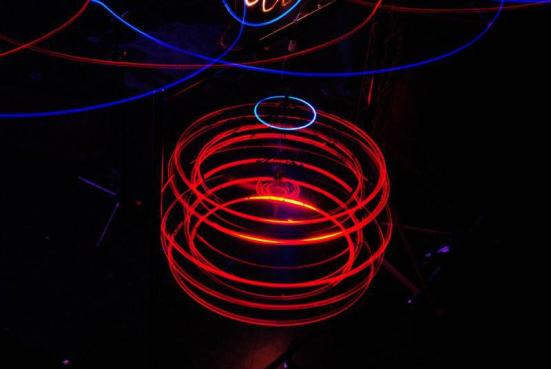 Volatile Light is a new three-part installation which has just opened in the theatre space at The Civic. Created by the IOU Production, a theatre company based in Halifax, they specialise in making original artworks across a variety of platforms, including: sound, video and sculptural installations; site specific performance, music, touring theatre, interactive digital works and virtual worlds. This specific installation uses light.

On walking into the blacked out theatre space you happen upon a number of spinning lights. It’s a strange sensation at first. Some of them are almost like cartwheels fireworks, other like u.f.o. lights in the sky. Standing there taking it all in, as the light’s speed up and slow down or swooosh in and out of view, it can feel a little disorientating – in a good way. After a little while though, your eyes slowly start to adjust to the darkness and you start to make out how this is all put together. Every light it attached to some kind of kinetic structure, which kind of reminded of a futuristic Alexander Calder. Some of them were like wire mobiles, others seems to be attached to tracks on the ceiling. It’s like Screwball Scramble mixed with Tron.

There was a class of young school kids in the room taking it all in too and they, along with their teachers, were enthralled by it all. The teachers were really into the second part of the installation with was a separate room containing three side-by-side tv screens which revealled a panoramic view and live feed of the installation. It looks totally different on-screen, like what I can only describe at painting with light. Each moving light seemed to leave a trail behind it, forming patterns which reminded me of that classic arcade game Missile Command.
The children though seemed to be more drawn to the third part of the installation which was an interactive light painting screen. It was in this part of the exhibition that you really see out how everything worked but on a much smaller scale. There was a collection fof children’s toy laser guns, swords, eye-glasses etc all coated in LED lights and EL wire. A small sensor or camera on top of the screen picked up your movements as you waved them in front of the screen and those were replicated on-screen, creating a newartwork. It was all quite impressive.
Both kids and adults alike would love this.
My only downside was the music, which was like old sci-fi sound effects. But that’s okay because I just slipped on my headphones, turned on some Underworld sat back and took it all it.

Volatile Light runs just until Sunday but there are a couple of special late night viewing taking place, so get yourself on over there and have an experience. 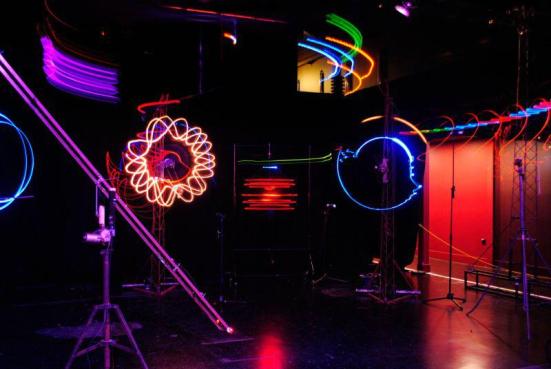 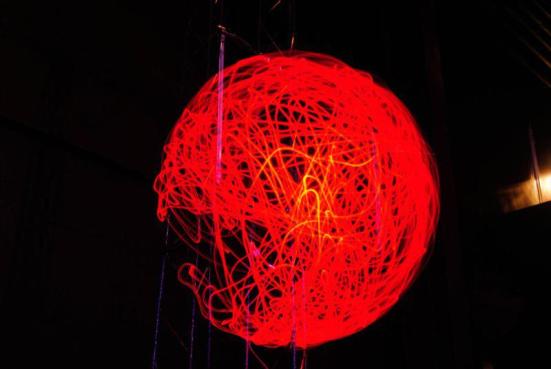