DISLOCATOR have fast become a favourite amongst local metal fans, and although they don’t have the precise technical ability that say Cavorts or Remains of You may have, what they do have is a clutch of fantastically well written songs that become an instant call to arms and can get any crowd singing along. See them just once and you’ll know their choruses straight off. I have my favourites already and it seems that also do the majority of the crowd in The Courthouse tonight.

On this Halloween special, band members Andy, Rich, Scarfe and Mai are seemingly dressed as Robin Hood, a ninja turtle, Hunter S Thompson and Jaz Colman from Killing Joke respectively. Their set is hit after hit – Predator, Waste Some Life and Power Trip kick off the set perfectly. Throw The Fucking Chairs gets the crowd wailing along and an unexpected cover of Metallica’s version of Die Die My Darling and the Slayer-esque Systematic Corruption are real set highlights. However,  it’s the classics Death Trap and Fire, with Scarfe’s stunning bass line that tips the metal scale for me. Some would say it’s homage to Cliff Burton but it really rings out like it fell from the fingers of Geezer Butler. The band’s songs and energy remind me of the early years of some truly great thrash bands, primarily Slayer, Testamant, Voivod and Anthrax. The best is definitely yet to come for Dislocator.

REMAINS OF YOU are a much more different kind of band and have recently undergone a number of  line-up changes too. I’m still unfamiliar with their songs and their titles but with the amount of gigs these guys have lined up this autumn, I’ll soon have no excuse. Technically, the band are brilliant. The double guitar attack of James and Kingsley and the aggressive rhythm section pummel away at the audience unabashed. The biggest asset here though is new vocalist Adam Welbourne. Although it seems as though he is still finding his feet as a front man and is experimenting with vocal styles, there is no vocalist like him. Throwing into the mix elements of hardcore, black and death metal; his mix of aggressive screams with melodic vocals is assured. It’s hard to truly compare him to anyone else. The nearest I can get is the amazing Luciano Lorusso George of Ephel Duath. His nerves aren’t evident either, as he has the balls to throw himself into the crowd and sing amongst them and in their faces.

It’s hard to place the band too; they are undoubtedly post-hardcore, although they mix in numerous styles and the audience lap it up. Any criticism would be at the overlong in-between song jams, but that is something I’ve never liked from any band. Regardless, they’re heading in the right direction. I’m going to enjoy watching Remains of You and its members evolve and truly find themselves. They have the potential to be incredible and I can see 2013 being a pivotal and exciting year for them.

Words and photos by Jason White 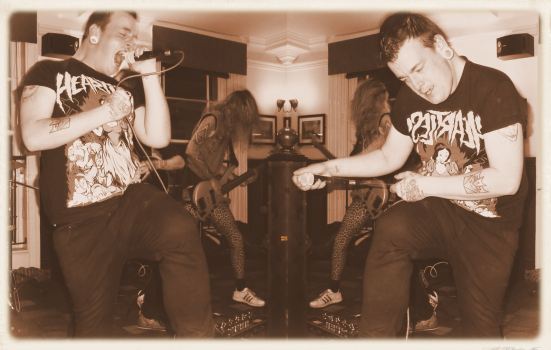 One thought on “LIVE REVIEW: REMAINS OF YOU & DISLOCATOR @ THE COURTHOUSE”